Ainsley Walden's art is a direct reflection of her love for the ocean and the creatures it contains. From the Long Island Sound off Connecticut where she grew up, to the dramatic California coast, to the deep blues off Key Largo, Florida, to the calm gray of Washington's Puget Sound, Ainsley has never strayed far from those aquatic borders that fascinate and inspire her.

In her pieces, one can see the shimmer and sparkle of broken light off the waters. Metallic blues and greens blend with coppers and bronze, set off by the occasional red or yellow, all change in light as though skipping off the surface of waves. It is the Raku process, first developed in ancient Japan, that brings life to clay for Ainsley. "I love the firing process, and the surprises each one can bring" she says.

Ainsley is represented in galleries all over the United States from Alaska to Maine. She still enjoys displaying at art festivals, however, where personal interaction draws the best from both customer and artist.

Continuing to expand on her work, she will introduce several new pieces each year, deriving satisfaction from the opportunity to express herself creatively in her chosen medium. As she says "I love clay and the endless variety of pieces that come from it, maybe I'm just a kid at heart, I still like playing in the mud!" 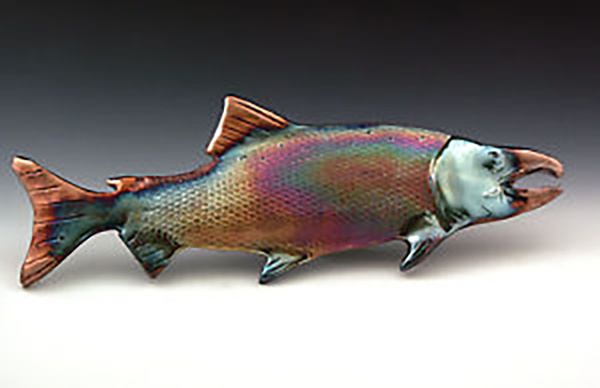